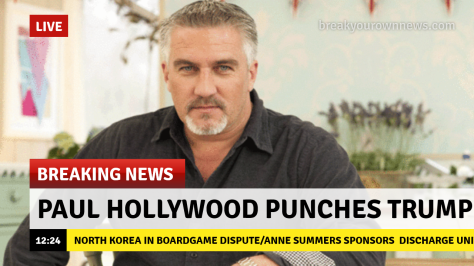 Filming of this series of the Great British Bake Off goes international with the contestants attempting challenging bakes in places such as the White House lawn, the Taj Mahal and Dudley.

During the USA episode guest judge Donald Trump repeatedly mocked three female contestant posteriors, describing them as the ‘soggy bottom brigade’ despite requests for him to stop. Eventually an exasperated Paul Hollywood lost patience and floored the president with a single punch. Secret Service agents stepped in to protect Trump but not before the master baker had violently kneaded the presidents groin, screaming ‘You misogynistic pussy grabbing c**t!’

The contestants had just been set the challenge of baking a gingerbread wall able to thwart illegal immigration while retaining a crisp when the altercation occurred. Mark Kermode and Simon Mayo, who’d replaced Mel and Sue as hosts for the Great British Bake Off, were heard to say “How do you attack the President of the USA, you just attack the President of the USA”  and almost joined in the assault with battle baguettes, bread suitable for striking and sandwiches, until the camera crew stopped the pair telling them “He’s not worth it”.

Donal Trump later tweeted that “SEE YOU IN COURT, THE NATION IS UNDERTHREAT FROM FAKE NEWS BBC AND PAUL HOLLYWOOD. I WILL SEEK THE DEATH PENALTY FOR TREASON!” It is also expected that the reactionary president will attempt to reinstate the immigration ban that was suspended by the federal courts, with the United Kingdom added to the list of majority Muslim Middle Eastern countries .

Paul Hollywood now has been shipped to Guantanamo Bay and awaits trial, its unknown if Trump will press for capital punishment. The Nobel Committee has presented  celebrity chef with an extraordinary Nobel Peace Prize citing that ‘No other act of Violence has brought hope and happiness to world, this while assailing the root of instability and conflict within the world’. 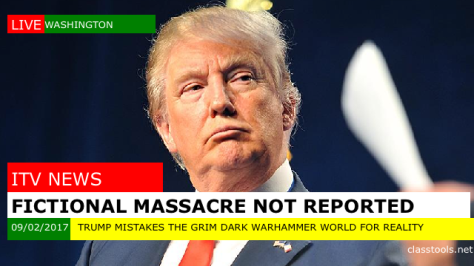 Donald Trump’s claims that the media is covering up terrorist attacks committed by fundamentalists followed his reading of the Warhammer 40K Wiki and believing it to be real, Wikipedia being the Presidents second choice for authoritative information on a subject after The Onion.

The President seems to have failed to separate fact from fiction, refusing to accept that the grim dark world of Warhammer 40K is nothing but the imagination of Nottingham based games company Games Workshop.

“Istvaan III is somewhere near Afghanistan, controlled by China, you understand that” Trump informed military leaders and when unable to locate the country in an atlas dismissed it as a “Fake Obama map” then started drawing his own which included notes such as ‘Nuke Mr Tumble’, ‘Here be TellyTubbies’ and ‘Donald and Malinda Love Iggle Piggle’ confirming reports that the President relaxes watching British preschool television.

Also included in Trumps map were the North African nation of Mordor, a British Isles that disturbingly looked like a penis and Oceania being an unrecognisable scribble with ‘Lalala, I can’t get Kylies bum out of my head’ below it.

The White House also released a list of attacks they felt “did not receive adequate attention from Western media sources”, the list includes many erroneous historical events that predate the printing press. “Did CNN send journalists to report the Muslim attacks on the Roman Empire? NO!” Sean Spicer told the media in his daily briefing, citing this as evidence to support his case.

Trump has also begun attributing quotes by the Space Wolves Primarch to Vladimir Putin, with sources within the White House suggesting that the President believes the Russian Premier and Leman Russ being one and the same.

A shock supreme court decision declared Teresa May will be unable to trigger Article 50, to leave the European Union, without express permission from Stephen Griffiths. Unbeknown to most the European Harmony Act 1984 included statute 7, ‘No attempt to leave the European Economic Area or successive organization may occur without consent of Harold Godwinsons heir, true successor to the crown of England; forsaking the yoke of Gilliam the Bastard and his Norman usurpers’.

This statute was added to the act by Kenneth Clarke following a wild night in Soho, while drinking in the Coach and Horses Peter O’Toole bet the then junior minister the pricy sum of £10 that he could not get ‘Gilliam the Bastard’ into an Act of Parliament.

Following extensive genealogical research and DNA testing it was confirmed that the oldest living male heir to Harold Godwinson is hospital Chaplin Stephen Griffith who, when contacted with this news, formally submitted a claim to the thrones of England, Wales, Scotland and Ireland but he does not want Berwick Upon Tweet ‘Because I’m a contrary bastard and when I visited there in 2008 I got stung by a wasp’. Enacting the ancient tradition of ‘Trial by Combat’ the Stephen is scheduled to fight the Queen, with this cultural event broadcast live on BBC4.

In addition Stephen Griffith has insisted that he be announced as the new Doctor, replacing Peter Capaldi, with Karen Gilliam returning as his companion to help with his sonic screwdriver.

Being a member of the Church of England Stephen will officially ‘sit on the fence’ and is refusing to take a position on Brexit, only after 100 years and numerous synods will a decision be taken whether to allow the United Kingdom to leave the European Union.