Michael Gove “Getting this book into schools, a personal ‘Mein Kampf”

“We should celebrate and cherish great works whose still resonate within society, long after their original printing’ Education Secretary Michael Gove told journalists.

Beating the podium with his fist he declared “Getting this book into schools was a personal mein kampf but we found a final solution to the issue and now all children have access to Hitler’s powerful, authoritative polemic; for we do not learn history just in order to know the past, we learn history in order to find instructions to prevent future mistakes and for the continued existence of our own nation”.

The project, costing £350000, has been paid for by a consortium of 8 Conservative Party donors, or a “band of fellow travellers” according to the Education Secretary.

“The pulsing heart of this book is experienced 87 years after it was published, we still talk about the ‘blitz spirit’, Top Gear drove across the desert in a car bearing the Luftwaffe’s livery while Chelsea fans, including our fine chancellor, hummed the ‘Great Escape’ during last weeks cup final. Without ‘Mien Kampf’ none of these would have taken place. It is because of this we should all acclaim and revere this book, it is why I have made it a feature of every school library”.

“If you wish for sympathy of the broad masses, you must tell them the crudest and most stupid things. All propaganda must be popular and its intellectual level must be adjusted to the most limited intelligence among those it is addressed to. To be blunt I speak crap because the man on the street only understands little but shit”.

Answering the final question the Education Secretary said “David modelled for the cover, we think he bears a striking likeness” 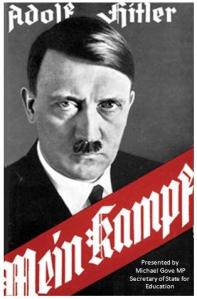 When pressed Gove refused to clarify if it was David Mitchell or David Cameron who posed for the cover, representatives of both refuse to comment on the matter.

Tony Blair is rumoured to be embarking on a similar project, donating copies of ‘Slaughterhouse 5’ to every school along with a little red book called ‘Quotations of Chairman Murdoch, an invaluable reference during his premiership. The book contains 10 blank pages towards the end for the reader to complete with fresh dictates from Chairman Murdoch. David Cameron also is known to possess a copy, the latest edition with a forward by Rebecca Brooks.

DirectGov = UK Governments digital service
DirectGove = What someone should do, preferably to the realms of sanity (and numeracy)